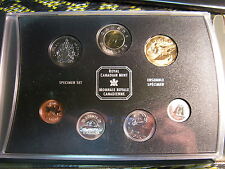 2. What type of source is this? Who created it? When and where was it produced?

This is a primary source, as the coins contained inside were made straight from the mint in Ontario during the time of printing in the beginning of 2002.

3. What other events or developments were happening when the source was created? How might they have influenced the source?

Events that were currently happening in the area was none other than a new year, influencing the year, designs and picture on the set, differing it from years past and future.

4. What do you notice that is important about the source? What is interesting? What can’t you explain?

When I first found it, I noticed that it was made with a smooth leather-like case around the coins inside, all of which were in mint condition and shining in the sunlight. The one thing that I found most intriguing was the 50 cent coin, as I had not seen one before, and before I figured out that there was a such thing, that was the one thing that I could not explain.

5. What groups might the creator have belonged to? Why do you think they made the source? Who was the audience? How might the background / values of the creator and audience have influenced this source?

The creator was most likely part of an organization, or directly employed with the Canadian mint, designing and replicating the sets to be produced and distributed throughout Canada.

6. What can you learn from examining this source? Does it help you answer you inquiry question? Does it confirm, extend, or contradict what you know? What does it not tell you? What further questions do you have?

I can learn that the coins were made in Canada in 2002, the amount of coins our country had in distribution as well as their values, and from the symbols I could learn what animals / boats / plants were closely affiliated with Canada. It confirms my thought of it being made in Ontario, the fact that there is a 50 cent coin, the composition of each coin, and the symbols our country uses on their currency. It does not tell me how many were made, and where they were shipped to. As it is a fairly good means of historical documentation in the economic field, I have no more questions that I haven’t already found out due to this, or have researched and answered for myself over the past few years.

After careful thought and consideration, eliminating the questions in which I believe we have already delved deep into, I came to the conclusion that the best question from the “Guideposts to Historical Thinking”, is “The Ethical Dimension”, or “How can history help us to live in the present. The main reason I have selected this question is due to the different view and route we can take, should we use it.

Last semester, we focused a lot on historical significance in any socials studies conversation, and as such, that is the topic that the majority of the class knows the most about. I propose that we switch gears, falling into a new category: “The Ethical Dimension”. This “Guidepost” focuses on learning how to understand our mistakes in the past, and attempting to eliminate or never repeat them again. Such events include great tragedies such as the holocaust, where many people were killed over a misled leader’s skewed view of how the world should be run. Back then, it would not have been uncommon for people in Germany to see his actions as justifiable, or correct, as that was what they grew up with, and were used to. Nowadays, most of us wouldn’t dare do anything like that, all due to the examination of the fallout and price of the events that occurred, and comparison to what that could do in today’s world. As dumb as it sounds, this is how people have risen to their current state. They learned from the consequences of their actions, and realized that some things just wouldn’t be good for them to survive, thrive, or get along with one another.

The reason this is important is so that we can build, grow, and survive a society, rather than focus on other topics without as large of an impact on daily life, like “[understanding] the people of the past”. With time, discussion, and independent inquiry, I am sure that we will be able to learn from this topic, implement it into our lives, and share the knowledge with others.

During my last meet-up with my mentor, we made breakfast cookies, literal cookies made from rice cereal and oats, making it a breakfast cookie, made from breakfast, that you can eat for breakfast. During the meeting, I copied down the flour recipe, and can now use it at my own house, both for in-depth, and for recreational baking. My mentor and I managed to get rid of ingredients that we no longer needed, and split the cookies up fairly. Overall, we have completed 4 recipes out of my 7. After consideration of the state of my current homework load, I will do all of the second bakes, or memorization bakes, where I make all of the baked goods again, but without any assistance. This consists of chocolate muffins, cinnamon buns, breakfast cookies, and oatmeal chocolate chip cookies. The next meeting is on the 24th of February where we will make banana chocolate chip mini muffins. One important fulfillment of my in depth contract that I have completed is substituting and editing recipes, which I have definitely finished seeing as all of the recipes, except for the chocolate muffins, were originally not gluten free.

1.What went particularly well during your mentoring sessions?

During my mentoring sessions, everything goes extremely well, from communication, preparation, clean-up, baking, and tasting. This is possible because of our pre-made bond from piano lessons over the last 5 years. This relationship allows for increased trust, respect, knowledge of how the other works, and where the cookware is stored. If I could change one thing, I would change my knowledge of the rules of baking, but as that takes time, I am happy to learn it along the way with my mentor.

2.What three strategies could improve the quality of your mentoring  interactions?

3.What is the action plan for implementing each of the three strategies?

We have shared any events that would complicate our future meeting for the next few months, and are constantly looking for ways to improve our baking experience by aiding with their tasks, and before you know it, we have switched tasks.

It took awhile to recover it, but I managed to re-post my indepth post 2

How did your mentor gain their experience/ expertise?

What wisdom have you gained from your mentor so far?

What have you learned so far, in terms of facilitation strategies, that might contribute to your own development as a mentor?

In Shakespeare’s Romeo and Juliet, there are a variety of main characters, and the one I chose to analyse with the Myers-Briggs test was none other than Juliet’s mother figure, the nurse.

The nurse, known by no other name than that, leaves a lasting impact on the audience with her unique sense of humour, and is about as dense as a iron ball. However, she has a lot of experience with taking care of children, namely Juliet, and after her daughter and husband died, she took over the role of Juliet’s mother. After analyzing and inputting the results into the 16 personalities test, I came down with the predicted result of one of the explorer options, The Entertainer, or ESFP. The E, standing for extroverted, fits the nurse quite well, as she is not afraid to make a show to complete strangers whenever she so chooses. This is shown greatly with her wild insults to the boys in act 2 scene 4. S, for sensing, also fits well with her character, for rather than relying on her intuition, she looks at a scenario and just feels what would work (even if she could be wrong), mostly relying on crude jokes or sarcasm. The last two, feeling and perception also reflect her personality, showing that she would rather jump into a situation and act as she sees fit, rather than plan beforehand.